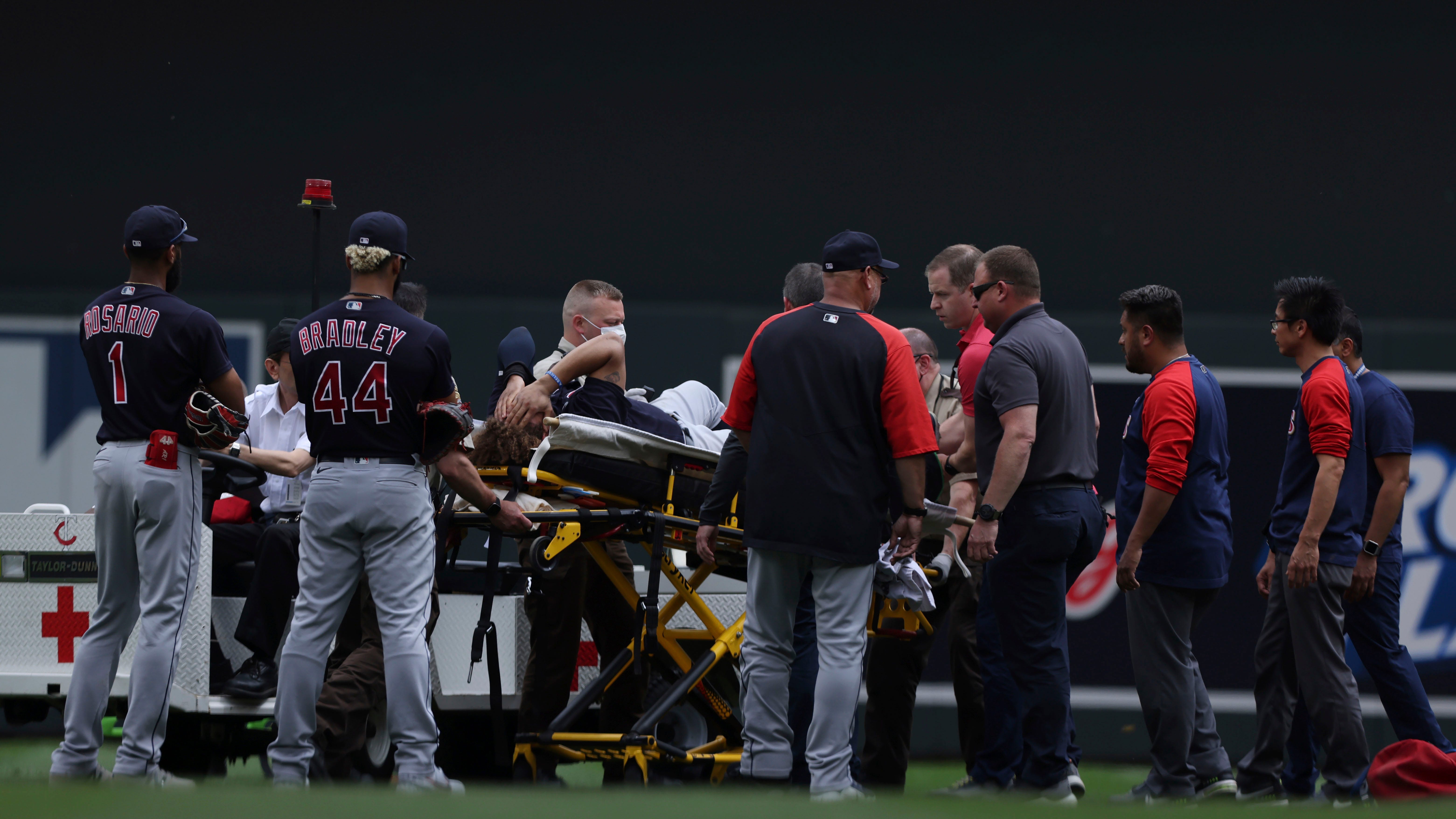 Nelson Cruz hit a three-run homer shortly after Cleveland right fielder Josh Naylor was carted off the field following a frightening collision with a teammate, and the Minnesota Twins went beat the Indians 8-2 on Sunday.

Cleveland manager Terry Francona said Naylor had suffered a broken bone, but didn’t say which one, and was being treated at a hospital.

Naylor and rookie second baseman Ernie Clement chased a popup in short right field in the fourth inning on a ball hit by Jorge Polanco. Naylor went flying after the collision and had his right foot catch underneath him, twisting the foot the wrong way.

Naylor writhed on the ground in pain and teammates immediately called for medical attention. His foot was placed in an air cast and he was taken off the field on a stretcher.

Clement, playing his seventh game in the majors, had the ball glance off his glove for a single. He had a cut on his chin.

Played resumed after a 12-minute delay and Justin Garza relieved for his major league debut. Two batters later, Cruz hit his 434th career homer, tying him with Juan González and Andruw Jones for 47th on the all-time list.

Andrelton Simmons and Josh Donaldson also homered for Minnesota, which has won seven of nine games and won the series 2-1 against Cleveland after Saturday’s game was postponed due to rain.

J.A. Happ (4-3) bounced back with six strong innings. He allowed two runs on six hits, striking out seven. In his previous eight starts, covering 36 2/3 innings, he had surrendered 38 earned runs.

Minnesota native Sam Hentges (1-2) took the loss for Cleveland. He gave up six runs on six hits and four walks in 3 1/3 innings.

The 6-foot-6 left-hander was a fourth-round draft pick by the Indians in 2014 out of Mounds View High School, approximately 12 miles northeast of Target Field.

René Rivera homered for Cleveland, which has lost five of eight.

Indians: RHP Zach Plesac (right thumb fracture) will start a rehab assignment with Double-A Akron on Tuesday and he’s scheduled to pitch two innings. He’s been out since fracturing the tip of his thumb on a chair while taking off his shirt on May 23. … Francona said C Roberto Pérez (Fourth finger fracture) and OF Franmil Reyes (left oblique strain) are feeling good on their rehab assignments with Triple-A Columbus. Francona said the team would re-evaluate Reyes’ status when it returns home following the trip from Minnesota.

Twins: RHP Michael Pineda will make a rehab start with Triple-A St. Paul this week as he recovers from right elbow inflammation. He threw a simulated game on Saturday.

Indians: RHP Eli Morgan (0-2, 10.32 ERA) will start the opener of a three-game home series against Detroit on Monday. Morgan will be making his fourth start of his rookie season after giving up four runs in five innings in a loss to the Chicago Cubs in his last outing. The Tigers are scheduled to start RHP Matt Manning (1-1, 3.38).

Twins: RHP Kenta Maeda (3-2, 4.85) starts Monday as Minnesota travels for a four-game series against the Chicago White Sox. Maeda hasn’t made it out of the sixth inning since April 7 but won his last start at Texas when he allowed two runs in 5 1/3 innings. Chicago has RHP Lucas Giolito (5-5, 3.80) lined up opposite of Maeda.

Businessinsider.co.za | Instagram is testing out a trial in which it scans users’ faces for proof they are over 18 years old